Re-imagining a Bedroom for a Child BEFORE AND AFTER:  In a world where children learning remotely from home has become “a thing” we’ve seen an increase in the desire of parents to focus on both the aesthetics and functionality of their children’s bedrooms. Just prior to the pandemic, Mother Hubbard’s Certified Master Kitchen and Bath designers elizaBeth Marcocci and John Petrie, combined to lead the design work on an expansive home nestled in the hills above the Susquehanna River, north of Harrisburg. Their charge was not only to remodel a dated kitchen, but also to totally revamp three children’s rooms and their connected bathrooms.

Inspired by the natural beauty and woodland views, the original 1970’s design of the home embraced a log cabin theme with lots of exposed timber framing in every room. As the Before photos below suggest, even the children’s rooms featured exposed beams, echoing the rustic theme throughout the home. As you look through the photo gallery above you’ll no doubt notice that the bedrooms are larger than most. While the size of the rooms does offer some design flexibility, the solutions we employed can be used successfully in smaller spaces. Keep an open mind as you review the project and imagine how you might adapt the solutions to your children’s bedrooms.

The family had two specific goals in mind for the bedroom makeovers. First, they wanted to modernize the aesthetics of the bedrooms and bathrooms, moving away from the log cabin theme and the accompanying 70’s earth tones to a lighter more contemporary sensibility. Second, each room had to accommodate two queen sized beds, one for the owner of the room and one for sleep-over guests.

The result is a contemporary look that is neither cold, nor too adult. As the children bring their prized possessions into the rooms, the design will serve as a foundation for the personalization of each space. The Before photos featured above highlight the 1970’s log cabin vibe of the home with one bedroom featuring wood paneling, another knotty pine flooring and all of the rooms using dark, contrasting colors for both the doors and trim.

To lighten the rooms, the clients chose a palette of white with a touch of gray for the primary walls. Rather than de-emphasizing the wood beams by painting them white, the design team highlighted them by selecting a chocolate glaze that is used consistently throughout the rooms. A bit of personality and whimsy was brought into the color scheme of each room. For example, in one bedroom there was a bright splash of color in a study alcove, in another the vaulted ceiling was painted with clouds, and in a third room an inspirational saying was stenciled on what might otherwise be a bland, long wall.

The bathrooms, with their 1970’s tile-topped vanities, and bathtubs with sliding glass doors, were the most visually and functionally dated spaces in the children’s rooms. Each had a tub and glass sliding doors which aren’t very functional in any child’s bathroom. As a result, not only were the bathrooms gutted, but also the tubs were replaced with more functional and friendly walk-in showers. One of the fun aspects of the projects was inviting the three children to help select the accent tile that would go in their individual bathrooms. Not only did this bring the kids into what otherwise might be an “adults only” project, it also resulted in an array of playful tiles of various shapes and contrasting colors. Unlike the bedrooms that are all a variation on a theme, each bathroom has its own personality from bright and colorful, to a high contrast black and white.

While free standing pedestal sinks feel right at home in a log cabin bathroom, the clients wanted substantial vanities in each bathroom to increase storage and decrease top-of-sink mess. The result are bathrooms that not only look and function right for young children, they’ll naturally transition into the teen years and beyond.

Think for a moment about room where you often see two queen beds. That’s right, in a hotel room! The owners of the home were very specific about their desire to have a second queen bed in each child’s room for sleep-over guests. Needless to say, a second large bed could quickly absorb available floor space while giving the hotel room sensibility to the room.

The team came up with a very smart solution by designing a wall of cabinetry the included a hidden murphy bed. Not only did this eliminate the hotel room feel, it also provided additional storage space. Now your child’s bedroom might be too small to contend with two queen sized beds, but a twin-sized murphy bed could be an excellent solution if you want your kids to have friends over for a night. Or, how about your home office that you want to double as a guest room? A murphy bed integrated into wall cabinetry could be the perfect solution for your needs. 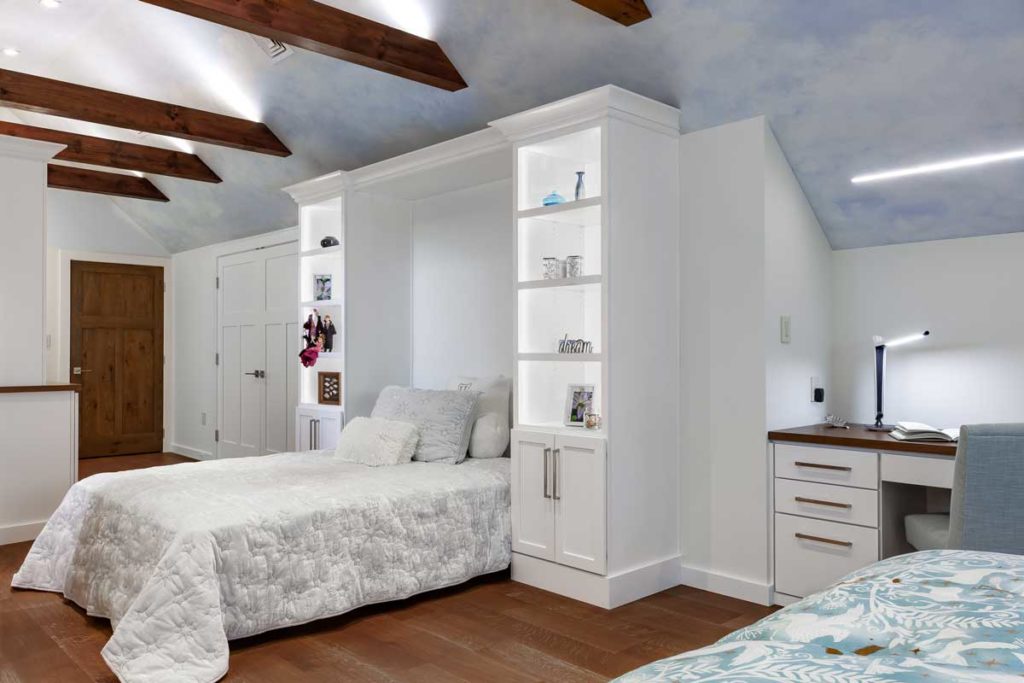 If you’re interested in seeing the kitchen and living space portions of this makeover, follow this link to our project gallery where you’ll find photos of the kitchen, laundry room and grand entertaining spaces.
CONTACT US
Chat: Open Chat Window
Phone: 717.697.0949
Find Us: Google Maps
PrevPreviousGettysburg Historic Farmhouse Remodel
NextMaximizing Every Inch of a Small Apartment KitchenNext